Shopping Cart
Your Cart is Empty
Quantity:
Subtotal
Taxes
Shipping
Total
There was an error with PayPalClick here to try again

Thank you for your business!You should be receiving an order confirmation from Paypal shortly.Exit Shopping Cart

A response to conference rage 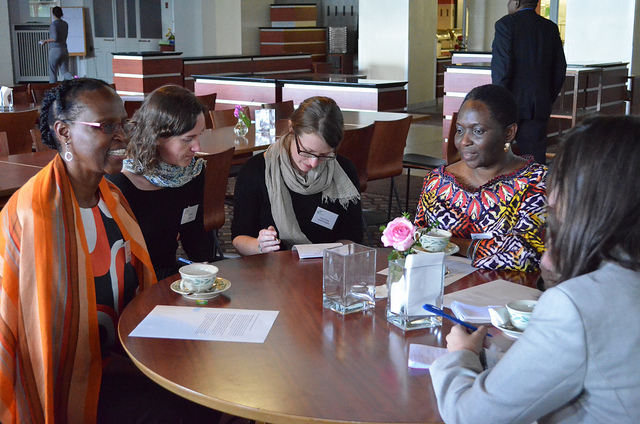 It was a breath of fresh raging air to read Duncan Green’s blog on poorly run conferences. Maybe frustrations can be the first step towards solving the collective action problem of people suffering at horrendously designed conferences all over the world, every day.

For those familiar with the world of open space technology, you will know that the whole premise of that methodology (30 years ago) was that coffee breaks might in fact be the most interesting and productive part of a conference, so how could you make a conference like one long coffee break?

If you’re at Green’s level of frustration, I suggest going straight to a book like Harrison Owen’s on Open Space. To answer the main question up front, if you have negligible time and resources, and the criteria for using Open Space are met, it has incredible potential.

I want to flag up front one key design flaw of most conferences: they lack a narrative. A ‘good’ conference might have some sort of coherent flow over the course of a day, which is then simply repeated on any subsequent days and book-ended by an opening plenary and a closing plenary. In designing conferences, I would suggest one of the key questions is how we will allow people to have consciously moved from one place in their understanding of a subject, themselves, or the world, to a deeper place.

To keep the conversation going, a few ideas to contest:

Panels can’t be interesting – I fully agree panels generally aren’t interesting, and are just a way of accommodating as many egos as possible in the conference program (see point 3). However, I tend to think they can be rather fascinating. But there are to my mind two critical success factors for a panel:

Pre-meeting: having the entire panel meet, with the moderator, at some point before the session for at least 30 minutes. I ran an annual conference in Switzerland for two years, and our conference assistants delivered messages to panellists when they arrived, inviting them to tea the day before their panel. This meeting builds rapport, it reminds the panellists (subconsciously if nothing else) that they are not the most important person on the panel or in the room, and allows them to realise that the often completely disconnected introductory remarks or speeches they’ve prepared won’t really get anyone anywhere. It allows the moderator to clarify the framework, and to arrive at a shared understanding of what the panel is trying to achieve.

Get a great moderator to moderate, not another expert: Allocating the moderator should not be a way of getting another expert onto the panel. For a good panel, you generally need a great moderator, and I suggest it doesn’t need to be an expert (even with academic conferences, though this hasn’t been my area).  Consider the best interviewers or moderators you have heard - they are 'experts', so to speak, in the flow of conversation, and they have techniques and tools for drawing out the best of what people have to say; we forget that what looks like them swanning in casually and ‘having a chat’ is actually the product of years of practice, and hours of preparation for a single interview. So the criteria for selecting the moderator: they need to prepare assiduously and have proven skills in facilitation (neither condition is sufficient on its own). Moderation needs to be recognised as a non-content aspect of the preparation.

Methods are not zero sum: A speech isn’t inherently bad, nor a panel, nor are group facilitation methods a silver bullet to productive group experiences. They can be blended. So for example in one conference a colleague experimented with a session that began with a panel, after which the speakers dispersed to different tables on the floor in a world café format for several rounds, after which they returned to the platform to continue the panel, drawing in the insights from the collective discussion.

Important people must speak, otherwise they won’t come – this is a standard assumption, which defies reality and logic. I always recall a conversation with a friend who was working for a High Court Justice in Australia. He handled her invitations to all manner of events, and at one point she said to him that she would be much more inclined to go to certain events if she could just sit and listen! An anecdote, of no scientific value. But it seems to me there are two possibilities. Either someone feels they are so much more useful to humanity that they indeed must speak, in which case why do we want them at our conference? Or, they are someone of genuine humility and can see the value in participating as another participant. So why not sort the wheat from the chaff by inviting people to participate rather than to speak? We adopted this approach for the conference I mentioned above. We had some panel sessions in the design, but all the panellists were invited to speak only after they had confirmed their intention to come as participants. Moreover, whilst in some contexts there is an objective hierarchy of expertise in a room, there is often a bias in that direction. It’s entirely open to question whether a VIP necessarily has anything more useful to say about, for example, broad questions of international peace and security than my nephews and nieces. Experience in those sorts of fields just equates with more to say, in my view, not necessarily more useful things to say.

Speeches are great. Sometimes, yes. Usually, no. There are two ways a speech can be powerful, as I see it. Firstly, by saying something new and interesting. TED and company do this nowadays; no need for a conference any more to achieve that. Secondly, more relevantly to a conference, there can be something about a ‘speech event’ that is significant and, at times, powerful. I’m not sure exactly how it works or what it is, and maybe there is research on it out there, and I certainly don’t deny it, but I’m fairly certain it isn’t reliant on the VIP-ness of the speaker.

Fill the program! In visual communications they talk about the 'white space' - where is the 'white space' in most conference designs. This can be just some space to breathe, but then reflective silence can be incorporated in all sorts of productive ways.

It’s worth remembering some behavioural insights, especially representative and status quo bias. So most conferences are done the boring way; this means a really bad conference of traditional format is an outlier from the mean, and doesn’t affect the general ‘meh’ sentiment of conferences in general. One of the risks involved in newer methodologies is that if people experience a bad example of it, chances are it’s their first, and they are likely to make their judgment based on that. So for skeptics out there who have been to one bad ‘new methods’ conference or unconference and have dismissed the whole endeavour, consider the possibility that it was not representative of the field. In another way, this adds weight to Green’s call for both speaker (and I would add, conference organiser) ratings and also social scientific research into different methods.

In relation to research, I would underline the importance of metrics around both satisfaction and impact. There is an open question as to whether conferences achieve anything (of social value) in certain contexts, and tend more often to serve as subsidised vacations for people pretending to do work. I'm not against subsidised vacations, but make it a proper vacation! And to be honest, if instead of organising a conference, we just arranged for all the relevant people to hang out at the beach for a few days, more may be achieved. We perhaps underestimate the extent to which our structure constrains and stifles, rather than giving the true freedom to be innovative and create.

Some other tools and methods to explore:

Oops, you forgot something.

The words you entered did not match the given text. Please try again.

Reply Victorwef
6:21 AM on February 3, 2017
Stress can have an unbelievable impact on health. It can come from a variety of sources and have a diversity of manifestations. The tips that are outlined below will aid in the identification of the factors that cause stress and in the steps that we can take to reduce its impacts or eliminate them entirely.

Reply DLkdip
10:45 AM on January 28, 2019
Missing dll from your computer? Error on loading Adobe After Effects? our site can fix it! Download your missing dll from http://founddll.com/qtxml4-dll/ page. Fix the error now!

Reply Speemynek
5:40 AM on December 17, 2020
cheepest cialis palemetili buy cialis professional reoste what are the sources of tadalafil
123...13Next »